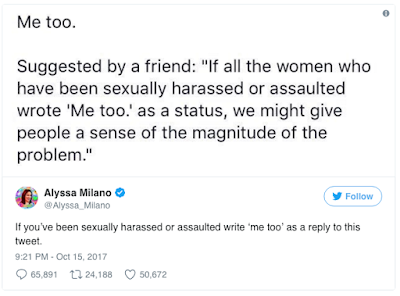 You’ve probably seen it by now, the wave of survivors’ voices speaking out across the internet. In the wake of the Hollywood sexual exploitation revelations, the antics of Harvey Weinstein and the mass of female celebrities coming forward about him; women (and men) across the internet have come together to post, tweet, and share the hashtag #MeToo, bringing to light the scale of the problem. All of us writing #MeToo have something in common: we’ve experienced sexual harassment or assault.

Our experiences include street harassment, being sent explicit photos, threats of sexual violence, molestation, groping, exploitation, rape, and everything in between. The hashtag has spread worldwide because the truth is, the experience of being sexually victimised is shared by almost all women everywhere. In spite of this, not all can or will join in for many different reasons. Some women won’t consider that they have been the victim of harassment or assault because it is so normalised and accepted in our culture. Women are taught to take a slap on the bum in jest, see a sexual comment as a compliment, or not even think about it. We often find ourselves accepting it like a character in a Carry On film. We see it as part of the parcel of presenting as female. There are also those who live in a situation where they have no voice or platform to share such information in the first place. They may not have an understanding support network, and they risk suffering a backlash if they shared. Then there are those who cannot speak out because it would be too painful for them to admit on social media; they don’t feel comfortable sharing and opening old wounds. For some, the horror of their abuse would leave a whole room speechless. Unfortunately this campaign isn’t for everyone, because as much as it pretends to be, the world isn’t ready to hear ‘those’ stories yet.  We can handle the ever-so-relatable tale of the overly friendly boss, or the guy at the festival who wouldn’t keep his hands to himself. We have all met these men and felt the burning anger and shame cast through us as they reduced us to objects they could obtain. We are not asking much from our readers to acknowledge that we, as women, have those experiences. That knowledge is common, but we may be asking too much of ourselves and our audience to reduce some of our most traumatic, life-altering experiences in to a copy/paste Facebook post or a trendy tweet.

With a simple ‘Me too’ we can empower each other through empathy, whilst displaying to the world the sickness within it that usually gets so little exposure. As a victim of extreme abuse, you can feel like you have to protect others from the truth of the trauma you experienced. You can feel isolated in a world of solidarity; you can feel untouchable whilst surrounded by voices offering support. There is a level still unreached for what is acceptable to share openly, and we won’t feel like it is safe to ‘come out’ until the world starts to see those of us with extreme trauma differently. That day will come when others don’t need to separate who we are from what happened to us, but can accept that what happened to us has fundamentally impacted us and may leave a scar that never fades. When they can see that damage and not coil away in horror, or reject us in an effort to protect themselves due to the force of our experiences knocking their world askew. We are not yet living in a world where victims are free to speak the truth without suffering huge social repercussions. We are still in a place where victims feel dirty and damaged and worthless because the world cannot handle their story.

We have started a good conversation about the prevalence of sexual harassment and exploitation and have shaken a few nuts from the tree, but we are far from cutting it down. Our awareness crusade cannot stop at another internet meme.

How is it that we sill need to say #MeToo when just last year we said #YesAllWomen?

If you cannot bring yourself to publicly share your ‘me too’ on social media, or if you don’t want the attention, backlash, pity, or just don’t think it’s anyone else’s business, that’s OKAY. You don’t have to say or do anything. You should feel no pressure. It is not your responsibility to speak out. You never asked for it, and you are letting no one down by not joining in. You don’t need to vocalise your solidarity because we know you are there. We know the statistics are at least 1 in 3. We already know the magnitude of the problem and it’s making no difference. You can tell just one friend if you want to, or you don’t have to tell anyone at all. This time it is your choice. Let us instead call for a chorus of ‘I will.’ I will stand up against the abuse and harassment of others when and wherever I see it. I will call out people who abuse their positions of power to sexually exploit others. I will believe victims when they come forward and I will not belittle their experiences. I will strive to make it so that no victim feels the need to keep silent for anyone else’s comfort, so they feel safe to share their story if and when they want to, and so we no longer put the weight of responsibility on victims to be at the front of the fight to end their own abuse.